Floors squeak due to floor boards that are nailed to joists becoming loose over time.  Newer construction techniques use glue and screws to minimize squeaking.  After watching “Ask This Old House”, they featured a repair system with a depth guide and screws with break-away heads called “Squeeeeek-No-More”.  I picked this product up in Home Depot in the US for $20 in the carpet section of the store.

The hardest part of the repair is finding the joists.  The instruction manual suggests going 9″ over from a wall and assume that joists typically run in the direction of the shorter length of a rectangular floor plan on 16″ centers.  The kit includes a special screw with a hex head and long straight shank to help locate joists.

My subfloor is constructed with diagonal 1″x 6″? boards with plywood on top (original wood floors removed) and then underlayment and pile carpet.

I found it pretty hard to find the joists and initially the joist was running the opposite angle I had assumed.  Even after locating the joist (the screw will stop spinning), the squeaks were improved but not eliminated.  I found with pile carpet,  I could use trimhead 3″ screws instead of the Squeeeeek-No-More screws.

I will be returning the system and have given up on fixing the squeaks until I replace the carpet. 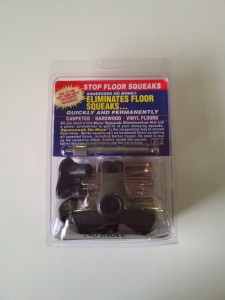