Under the provision, copyright holders — such as movie studios — send a notice to ISPs to inform them about alleged infringements. The ISP, in turn, is required by law to forward that notice onto the customer. But the ISP isn’t allowed to reveal the identity of the person to the copyright holder without a court order.

If you want to protect your privacy, you can use a Virtual Private Network (VPN) service.  Initially used a secure way for mobile workers to connect to their office networks, this technology is now commonly used to protect privacy.  By privately connecting to a server in another part of the world, your internet traffic will be routed to that server and will appear to originate from that location.  As long as that service does not log your IP address, you can use the internet with a fair amount of anonymity.

Though privateinternetaccess.com is one recommended company that provides this service, I use cloudnymous.com since it is pay per use.  You can select a server based on location and the rates vary depending on its location (either daily, monthly or per gB).  A typical daily rate is 15 cents.

Cloudnymous uses the openvpn protocol and provides an app which shows a map of the world with the servers pinpointed.  There a few free servers that you can try before committing to buy credit.

Though only some servers officially support P2P, I’ve found as long as you have the .torrent file downloaded, P2P will work.  Switching servers if speeds are slow can also help.   I’ve also had some connections disconnect so I would wait to see if you have a steady connection before walking away.  With Vuze, you can bind the program to a connection but I’ve found the connection name may change each time.

VPN’s can also be used to view websites that restrict video based on your location though they could be blocked.  There are proxy services such as Hola and Proxfree that could be used to bypass geo restrictions.  Proxies don’t encrypt your connection to the server like a VPN and typically only work with HTTP (web browser) traffic.

Update Mar 2016 – I notice servers disappearing and went to the cloudynmous website to discover they were shutting down by the end of the month.  Looks like I need to find another provider.  Private Tunnel charges by the GB and has an unlimited plan for $30/yr. 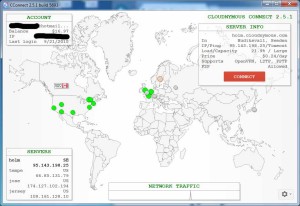